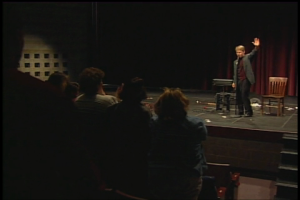 John P. Hopkins has been making people laugh for over 25 years and it’s been his great pleasure. In addition to his flawless sleight-of-hand he also incorporates juggling, ventriloquism, pick-pocket,  and audience participation with lots of laughs to craft a performance not to be missed.

“I started out life with every hope of becoming a normal human being but then the magic bug hit and there was no looking back. I began to preform  tricks for anyone who would sit still. Early on I discovered that I had a talent for making people laugh. That was a big deal because if they’re laughing they can’t watch too close and the whole thing became a lot of fun. While in college I worked as a bartender and did tricks behind the bar for tips. One night an old guy came in and I fooled him very badly with a trick involving his ring. His was very impressed and asked me if I would teach him said trick, this lead to a interesting talk . It turns out that this guy had been a pick-pocket back in the thirties when he was a young man.The long and short of it is that I taught him the trick and he taught me how to pick pockets—it was one of the better trades i’ve made.  This was only the first in a number of encounters with some very interesting people, I’ve met a lot of magicians, comics, ventriloquists and card cheats in my life and learned some very interesting things along the way. It’s all been great fun.”

John has been fooling people and making them laugh both on stage and up close for over twenty-five years. A very popular performer with both  corporations and colleges, his talents have taken him to every state in the union. If you have an event in mind,Hopkins is the top choice!

“John was terrific. I could hear them laughing all the way in my office and that’s in a separate building!”

“Last time we had Hopkins he drew a line three blocks long…..then we took his chalk away.”